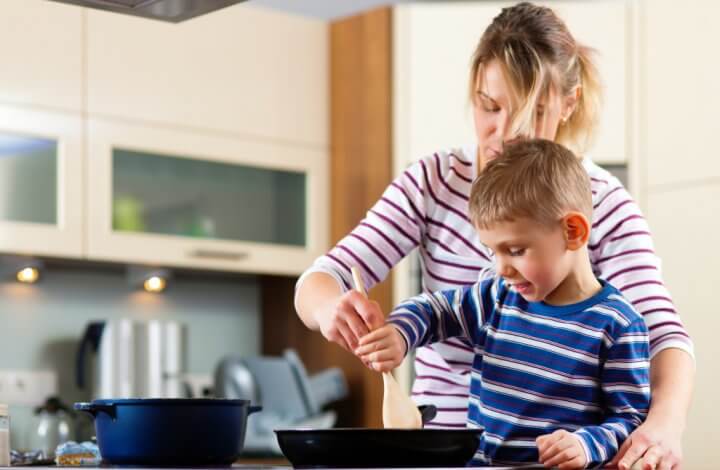 “What are the activities he enjoys the most?”, “What are his problem areas?” –  These are the most common or say permanent questions that feature on every questionnaire and in every discussion pertaining to my eight years old autistic son.

Apart from watching an array of videos on YouTube and swimming, food is something that interests him very much. He is a Foodie to the core. Not only he enjoys eating it, preparation – the entire process from scratch to bring out the dish to the plate interests him. He is keen about particular tastes, textures, colours. He loves watching numerous cooking videos on YouTube too. There was a time when he used to spend hours sitting at one place and mixing every ingredient at his disposal no matter how varied they were in nature to each other, without any consideration whether they would compliment each other or not – milk, flour, eggs, ketchup, turmeric, gram flour, coffee – all in the same pot (a lot of mess on the floor too 🤣).  The sense of that mixture on his hands soothes him.

To put simply, Food motivates him. If eating is his way to beat his stress (inability to express himself can lead to lot of stress in non verbal autistic kids), cooking keeps him engaged. I was pretty surprised at the beginning to see his keen interest in the culinary art (excuse me for using a heavyweight word just because it seems pretty on this page 😉). If I am cooking his favourite dishes he would stand right next to me carefully observing all the ingredients that go in the making of that dish. He would hold the laden and mix carefully and of course add water at the end. In fact, adding water according to him is a staple step for preparing every dish and if I fail to pay attention even for a second he would add water to every pan and whether it’s a fry or omelette doesn’t matter 😁 because “water is important” and feels that his mom forgot this important step in the process 🤣.

And the extent of his involvement in cooking can be estimated from the fact that if he likes a dish and follows closely the cooking process he won’t forget neither the ingredients nor the steps even if I am going for that particular dish after a long interval. His interest keeps his memory and senses strong. That made me realise that cooking can have therapeutic effect on him. It stimulates him as well as locks his concentration which is what we are working on.

On that note I would like to share a recipe of a curry that my son loves to prepare and eat as well. I cook on instincts and don’t keep measurements so excuse me for not mentioning Table and Teaspoon units 😁.

Ginger, garlic, green chillies (1 or 2 as per your taste buds 😁)

Cut the cottage cheese in cubes and shallow fry them (this is an optional step as few like their cheese as it is, we are not among them 😁) and keep it aside.  Steam (boil) tomatoes and onion together to soften them. This would ensure the sweet mild taste of this curry. Grind the softened vegetables along with cashews, one clove of garlic, ginger, green chillies to a soft paste. Get ready your pan, heat the oil (2 tablespoons). Add the cumin seeds, cardamom, bay leaf, a small cinnamon stick to the heated oil and let the aroma engulf the kitchen drawing everyone to the kitchen. And then add the paste you have just ground. Add turmeric, coriander powder and garam masala and stir well till you can feel the aroma in air and oil separating in the pan. Add a one or one and half tablespoon of tomato puree. Continue stirring on medium flame till the rawness goes.  Now add cheese cubes, mix well. Add water (my son’s favourite 😁), cook on simmer.  Meanwhile also add salt, red chilli powder, pinch of sugar. Mix well, keep cooking on simmer. After the gravy thickens add fresh cream before switching off (don’t forget to taste to do adjustments before you serve to win hearts 👍😊)

The moment my son sees this, he waits impatiently (though impatient he waits, which is the core of all our intervention programs). Cooking is definitely a therapy in many ways. I see it that way. It is helping me keeping my son engaged in an activity of his choice. It motivates and soothes him at the same time. It helps us bond. And it could be a perfect career option for him if he can invest in it at any point of his journey.

Do try this – both the recipe and therapy and share your moments.