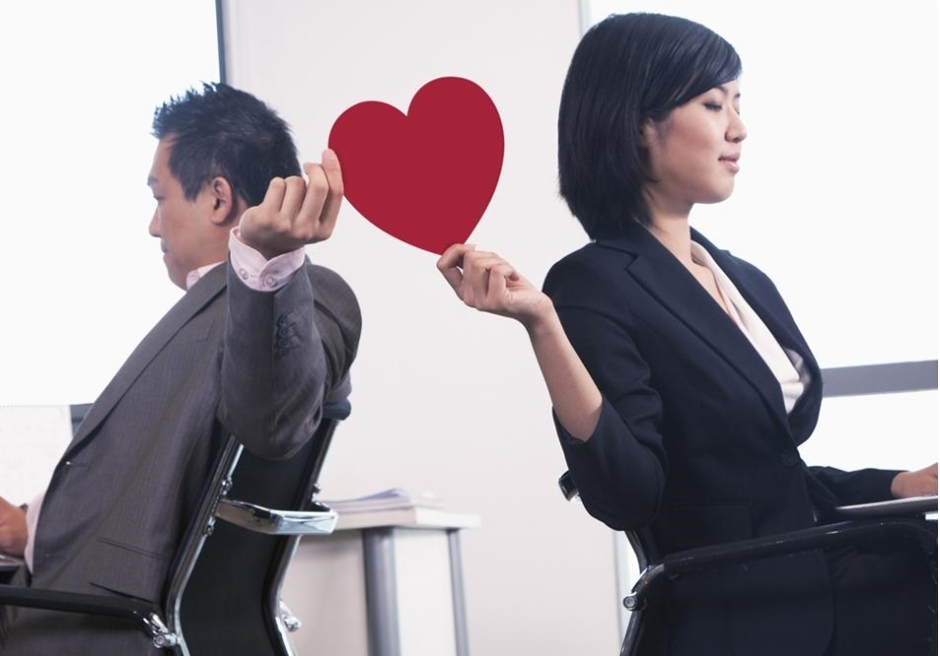 Radha hurried with the old man by giving him a bowl full of ice cubes and sent him off wishing Good Night. She jumped onto her bed in a flash and clicked on the notification to let the comment of happygolucky, the blogger who had always made her heartbeats skip thousand times per second, appear on the screen. 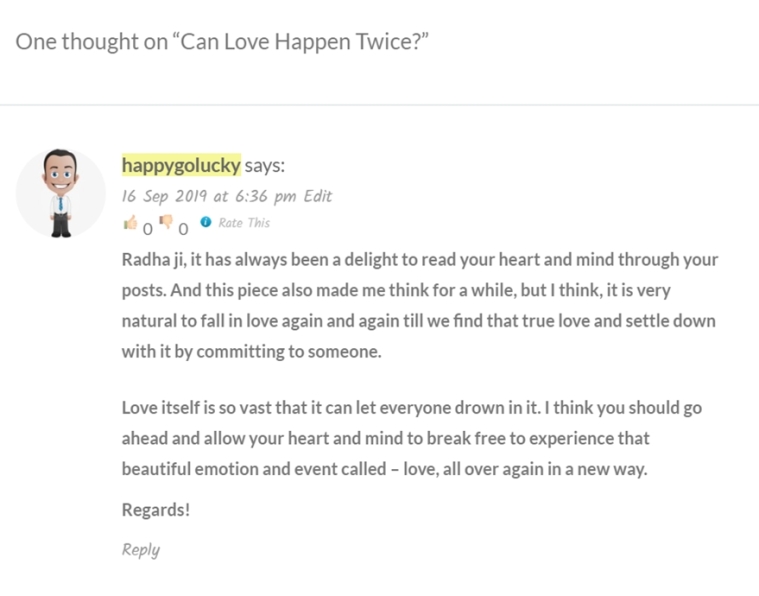 Radha read the comment for the 19th time exactly.

‘So the man who has made my heart so palpable for the last one month or so, says I can allow myself to fall in love again!!!‘ Radha repeated this statement in her mind again and again as she kept looking at the screen, at the name of the blogger, the user icon and the comment. It had been 13 years since she was heartbroken at the age of 22, when she was just an immature young adult. And now, at the age of 35, her heart felt the same emotions captivating her whole-being…making everything look so beautiful and colorful around her. She could smell only the aroma of rose buds even when there were no thorny rose plants near her.

But, there was something that was stopping her to express herself to the person more openly. Her reasoning mind kept pulling her heart backward telling, ‘when things pertaining to love could not work out in person, how could then the same be possible virtually! Of course, there are many such examples of virtual love but for her… Is it possible?‘

She closed the lid of her laptop and slid her body down on the bed from a sitting position to lying down comfortably closing her eyes as her mind went back 13 years past, when she met Sanjay, her heartthrob then…

Sanjay was a 28-year old man then, who was her immediate boss in her first working place. He had a charming demeanour about himself that had always allured the females working with or under him, including his female superiors. But he gave his heart only to one girl in the whole world and she was Radha. Radha was a mere 22 year old then, who could not resist herself even a bit from falling in love with a person like Sanjay when he proposed her. She was an orphaned child who was brought up by her only family member, her granny. She had craved for love from her very childhood and the seed of love which Sanjay sowed in her soaking heart sprouted within no time. The females at Radha’s work place were envious of her but she… she was flying in the mid air as her wing, her love, Sanjay made her feel so loved within such a short time.

It was not difficult for them to convince Radha’s granny for their relationship and ultimately marriage as she also loved Sanjay as a fitting candidate for her grand daughter, who could look after her and love her after she passed away.

She will never forget that day, 28th September 2006. She was waiting for Sanjay to come and plan the final list of invitees for their wedding reception. Time passed by but there was no sign of him. They were supposed to meet at her place. Her granny was also worried seeing her baby Radhika in tension. She patted her back and asked her to calm down and wait for Sanjay who might be busy in something very important. Radha had dialed his number 10 times by then but there was no response from him.

At around 8 PM in the evening her best friend Sukanya called her up and asked Radha to switch on the TV right away and watch the news on so and so channel.  It was not a news that was broadcasting that day, but a nuclear bomb that blasted and devastated both the granny and her grand daughter leaving them dead emotionally and mentally.

It was unbelievable for those two poor souls to acknowledge that Sanjay was a trafficker who was arrested that day being caught red handed. His secret dynasty was busted by a group of secret police squad formed only to find the culprits of absconding girls and women recently.

Radha’s heart shivered in pain and agony as all those thoughts of her past came so alive in front of her after so many months again. She clasped her head tightly with her both palms as she felt an excruciating pain encompassing her heart and mind both. She felt extremely lonely that moment, which she felt the day when her granny passed away leaving her in tears. And now she was all alone to decide her heart’s matter by herself…

“Radha ji, it has always been a delight to read your heart and mind through your stories and articles. And this piece also made me think for a while but I think, it is very natural to fall in love again and again till we find that true love and settle with it by committing to it.

Love itself is so vast that it can let everyone drown in it. I think you should go ahead and allow your heart and mind to break free to experience love again.”

She repeated his words in her mind as she shook her head, reconfirming herself once more, ‘No… Never again… I might feel attracted to his intelligence by reading his comments and the wisdom he imparts as a person which reflects through his own blog posts but I can’t feel that same love again, even his feedback on my post seems very convincing about it.‘

She shook her head and again allowed her mind to take control over her heart as she went into a deep slumber without a second thought.

16 thoughts on “AN UNEXPECTED ENCOUNTER – II”