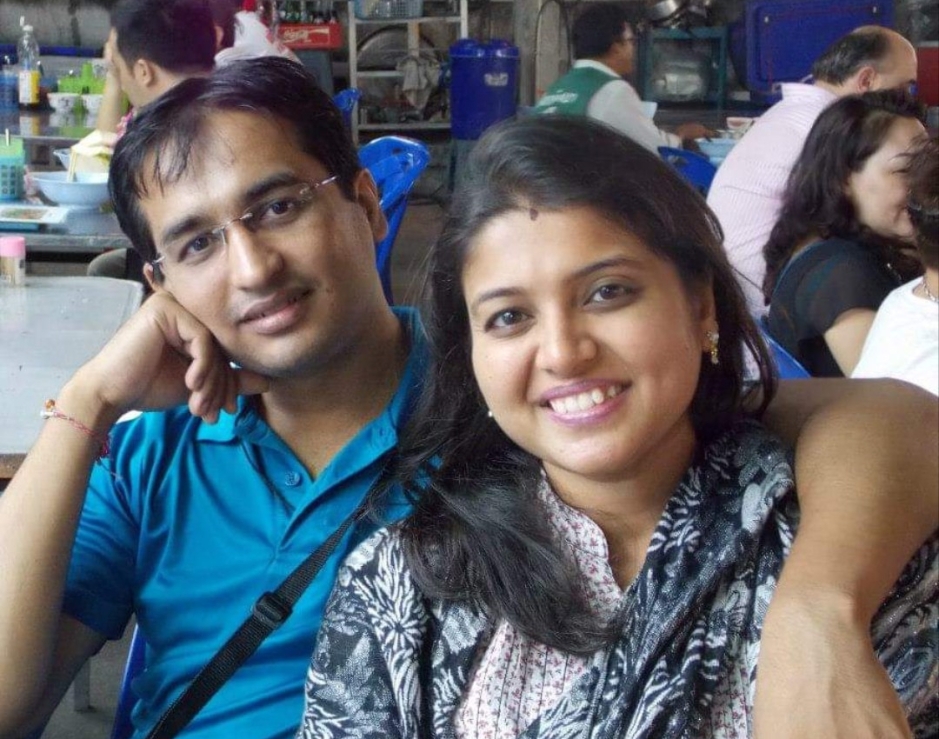 Ours is a typical arranged marriage. Both the families met, the would-be bride and groom stole glances at each other and then done! Shadi Mubarak ho! Oh, they did allow us to talk in private (in the other room) but all eyes and ears were on us though. We made the biggest decision of our life in those 45 mins.

Two days later, we mustered up the courage to meet all alone, obviously, it was a secret meeting. So I was supposed to see Mr. Husband outside Mc Donalds at Andheri station. Those were the days when smartphones were not introduced in India and there were no smart calling plans either. So the last we spoke was when I left from work. My cellphone battery was low and I had jotted down his number on my hand. As luck may have it, I got stuck in the infamous traffic in Andheri and I was delayed. What to do now? My cell phone had died out by then.

After 30 mins delay, I reached the venue only to realise the he was not there. I felt so embarrassed but heck, I had informed him that I have left late from work and he understands the traffic conditions here. I was contemplating whether he had left already? Also what started scaring me was thoughts like he being very strict or particular and he might assume me clumsy because of this incident, then it had be so difficult to spend my entire life with this man!

Cut to the venue, so strolled back and forth around the point we had agreed to meet but there was no trace of him. It had started raining by then and the rain and the overall embarrassment had taken the best of me. Finally, I gathered enough courage to call him up but my phone had died already. I spotted a public phone only to know that the number I had jotted down on my hand had been wiped off already. Gosh! Could there be anything worse?

I was almost in tears, partly because of the fear about what he will think about me and whether he will reconsider his decision of marrying me and partly because I was totally overwhelmed by the happening of events. I could have planned better, isn’t it?

I scanned every person who had taken shelter from rains under the shelter of Mc Donalds but he was nowhere to be seen. With a very heavy heart and eyes full of tears, I turned back and started making my way to the station……

…… and then some called out my name loudly… ADITIIII… I turned back at a lightning speed and I saw a man waving at me from near Mc Donalds. He was grinning from ear to ear and took quick strides to reach me.

I was staring at him in disbelief and with no memory of who he was…obviously wondering if it was the same guy I had agreed to marry two days back. Yes, you got it right, I DID NOT RECOGNIZE MR HUSBAND.

He was standing right in front of me all this while, he was watching me search for him from one end to the other of the premises, he saw me going to the phone booth and coming back without calling him, he saw me staring at every person out there trying to look for him and he was merrily having fun! He couldn’t contain his laughter and was only short of rolling on the floor laughing and poor me I didn’t know whether to cry or laugh.

Now, I can’t stop thinking how better it had been if smartphones had already arrived in India by then and I could have had his picture on my phone but anyway, the phone had died out so the whole universe was in tandem to put me in this embarrassing situation.

So that’s how my first date with Mr. Husband was. And if you are thinking whether he reconsidered his decision of marrying me let me tell you he didn’t! He said he was looking for a joker in his life and I am exactly that.

This was 10 years ago. Today I continue to be his joker doing silly things and making him laugh.