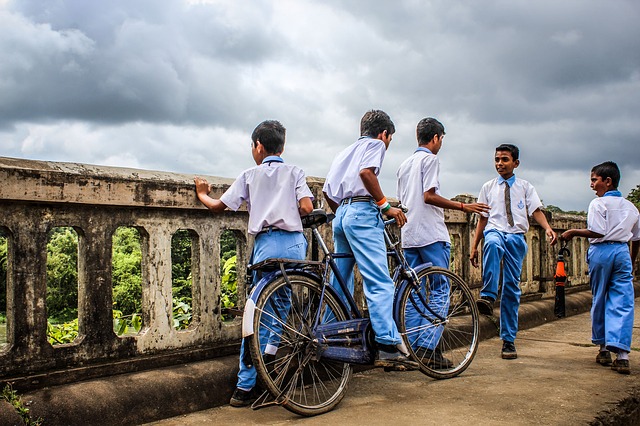 She comes in, sharp at 9.30, pale, lanky and shivering from the cold that has begun to build up over the past few days. I immediately chide her, “You’ll never wear a sweater to work, will you?” as I hand her her usual cup of tea.

“Forget it, Didi. Where am I supposed to keep the sweater when it starts getting warm again? So I don’t wear one.”

“But you’ll catch a cold this way…”

“Who cares. Do me a favour…” and she brings her cell-phone to me. “Tell me what’s written in this text?”

I read her some promotional text from some company. And I remind her for the umpteenth time that she ought to at least learn the alphabet. Her reply is always the same “Who cares?” And she forthwith busies herself with her work around the house.

This is the daily morning conversation I have with my house help. Over her education, or rather, the lack thereof. She is one of two girls in a five-sibling household. She belongs to a less-fortunate background and hails from a backward region in India. Resultantly, her parents never stressed that she or her sister ever finish their education. She has studied only till the 7th grade, her sister has studied less than that. And the sum total of their education has now reduced to an ability to scrawl their name on forms and bank cheques, should the need ever arise. But for all purposes, they are, what we call illiterates in India – angootha chaap.

Remember that age-old advertisement issued by the Indian Government that used to air on DD  – Poorab se surya uga, where an old man teaches a child from an unfortunate background how to start writing his name? When I was a child I used to wonder would I be able to know it all if I only learn how to write my name? Obviously not, as I later realized. The advertisement was a great initiative by the Rashtriya Saksharta Mission. But unfortunately, education is still underrated in our country.

Learning how to write one’s name is not an education, because one can learn how to write their name purely by memory, without learning the alphabet at all.

In fact, learning the alphabet itself is not an education, because the alphabets are of no use if one does not know how to string them into words and sentences, or read them from a book or a placard.

Like my Help. She knows the English and Marathi numbers, but does not know basic mathematical problems. She knows the Marathi alphabet, but does not know how to read or write them. She knows how to write her name, but does not know any other word consisting of the same alphabets constituting her name. She does not even know how to tell the time! She comes to me for help with everything related to reading or writing. I fill out her bank forms. I inform her of her child’s scheduled parent-teacher meetings. I tell her when she’s supposed to pay for her loans. I have even instructed her on which medication she should take at what time, all because her ‘education’ amounts to nothing. And the irony is that she has admitted her child in a private school where English is the medium of instruction.

I often ask her, “Just what did you learn till the 7th grade if you don’t even know how to tell the time?” She only shrugs in response.

You may say that it’s her fault entirely for not using her education and I would say you are not wrong. But her circumstances, coupled with the prevalent social outlook on girls her age and of her background does not leave her a choice in the matter. Her parents thought it wiser for her to be married off at the young age of 15 (yes, unfortunately, child marriages still happen in India),  rather than letting her continue her schooling. They thought she would do better being a housewife and a house help, than being a teacher at a primary school. Because teachers at primary schools have liberated ideas and no one in their society needs a woman with a smart mouth.

She’s not the only one. There are countless others in India like her. There are countless men too, who know nothing beyond writing their names. Her brother is no less. He’s cleared his matriculate but does not know how to write a letter in Marathi or Hindi. I wrote his resume for a job application for a clerk’s position because though he can read somewhat, he cannot write at all. Needless to say, he’s still jobless.

Education is still considered a necessary evil in our country not a pure necessity, like clothing and housing. Forget about her class, I still come across women my age and from my background who have only cleared their matriculate and have forgotten much of what they learnt at school because they were expected to be home-bodies. No, this isn’t about how women should be allowed to work; this is about how women should be encouraged to at least get a graduate’s degree, because even if a woman is to be a stay-at-home mom, she ought to  be able to teach her own kids, and not ship them off to tuition classes, which, unfortunately, has become the norm these days in India. There is a parallel education system running, no, thriving in our country, all because there are so-called educated parents at home who are unable to teach anything to their children. What use is such an education? What use are such advertisements on education when the concept itself is reduced to learning by rote? An education does not end at school or college. It begins from there and is a life-long affair. But unfortunately, for many of us, their education ends when they receive their graduate degrees.

There are free schools with free books and free meals but their’s still no zeal in the lower echelons of our society to study. Why? Because earning the bread takes a precedence over receiving an education. Because these free sops are taken for granted rather than being grateful for. Because our society itself permeates an outlook that its okay to be an ‘educated’ angootha chaap. What India needs is not just education being thrust upon the masses, but education being made a mandatory requirement for every walk of life, even if one wants to be a house-help. What India needs is a change in the outlook of the masses, right down to the grassroots, that being educated means reading, writing and speaking at least one language well enough, apart from being able to do basic mathematical calculations. What India needs is a cultural revolution that an education does not end at marriage or being a mother.

What we need is to tell ourselves that its NOT okay to be ‘educated’ angootha chaaps.

She marvels at my 4 years old’s ability to already recognize the alphabet from a chart I’ve hung at home, her ability to use complicated words and count from 1 to 30 and backwards. I tell her again, like I always do, “Sit with me for at least half an hour each day and learn the alphabet. Slowly, you’ll come to learn how to read and write too. I’ll teach it all to you. I’ll even enrol you in night school, if you want.”

She only shrugs it off and reiterates, “Who cares? At my age what am I going to do with reading or writing?” And she busies herself with the sweeping again.

7 thoughts on “EDUCATED ANGOOTHA CHAAPS: THE REALITY OF ‘EDUCATED’ INDIA.”

@prabhjotksaini 's caption is chosen as the best for the last contest held in August 2019. Congratulations, Prabhjot!
if I always shun people for being too active on Social Networking sites then I will always have that fear of being judged or ‘think what would people think of me’ when I get online even for an an hour on Facebook. So, I keep myself in Invisible Mode. So, in my opinion, the psychology behind the thought, “what would people say” pops out because of our judgmental attitude. .............. This is just the excerpts of the article, published today. If you want to read the whole article please visit the site by visiting to the below mentioned link - https://wp.me/p6y9QP-5BO #people #opinion #judgementalpeople #articles #whatwillpeoplesay