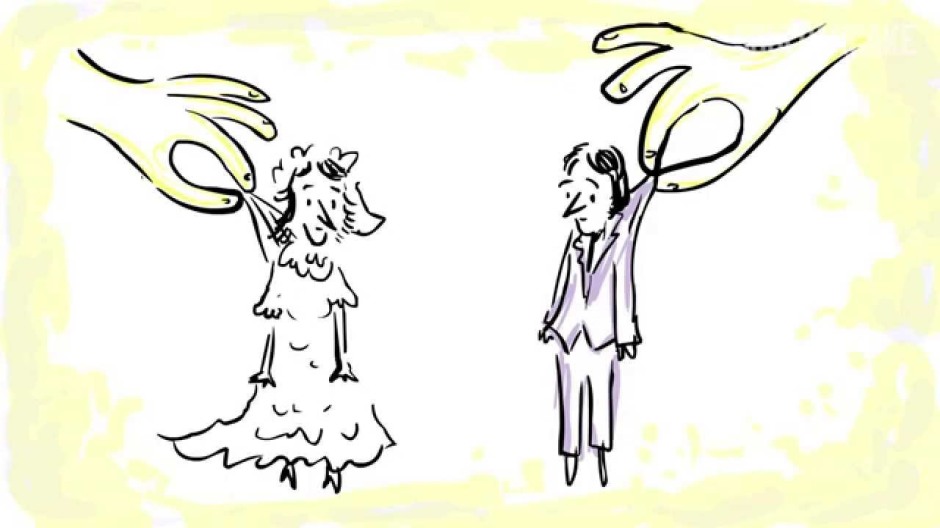 One of my friend recently sent me a message on WhatsApp defining “Oxymoron” which means a phrase where words of completely opposite meaning are brought together.  Example : Open Secret ( both the words are opposites), still used together.

One more example which made me laugh only to think later was “Happily Married” 😉.  Well they simply don’t go together or at least this is how many stand up comedians think so ( marriage is most commonly touched upon topic by almost every stand up comedian whom I watched so far).  And I would like to talk about it today.

My question to all of you, married or otherwise:  Is marriage a Bond or a Bondage to you?  I hope there is no need to explain the difference.

My understanding :  Since every relationship demands compromises and sacrifices marriage isn’t different.  Marriage is a bond when compromises are made for happiness – of individual and eventually it becomes mutual.  It becomes a bondage when compromises are made with the sole purpose of avoiding the arguments.  It goes like “I give up now, do whatever you want to do, I don’t really care”.  The first case is underlined by emotions of love and respect and the second case is marred by the feeling of bearing the person and the relationship.

Well it’s a very complex subject in itself that we might probably need a round table conference to discuss layer by layer 😁.

Marriage – Independence – Society -Individuals:  In India the institution of marriage holds a place of utmost importance.  It’s not just a definition of relationship between a man and a woman. It decides the fate of not just two individuals tying up the knot but the families involved.  It’s the society that frames the guidelines at first place about how a marriage should be, how the individuals are supposed to conduct themselves before and after marriage (predominantly for women). In short it’s the neighbors who are more curious and worried about your marriage than yourself because they are the society.

If you’re a girl:  In a country like India marriage starts doing rounds in parents mind the moment a girl hits puberty (true for majority).  Since then innumerable restrictions start making their place felt in a girl’s life.  For instance: Must learn how to cook; shouldn’t be headstrong; must learn to adjust (must be her second nature) in every situation; rebellious nature a big “NO” (in short no partying, no tattoos – for many they are symbolic to rebellious attitude).  I can go on and on, literally.  From what to wear to whom to talk and how to,  constant efforts are made to cage the free spirit of a girl.  Reason: If you don’t comply to set standards you won’t get married – it’s this simple and hell will break loose if you die single.

If you are a boy: Well I don’t want to be branded as a feminist by not discussing about how marriage  effect a boy’s life.  They do stand a fair chance of being discussed, isn’t it?  When a boy announces “Maa meri naukri lag gayi” (Mother I got job) the next big agenda on family’s bucket list is “Get him married”.   Even if he is insisting that he is not ready for a commitment,  reaction of parents be like “marry once you will be responsibly committed automatically”. And just the way marriage impose restrictions on a girl, it definitely impede independence of a man (I can see those chuckles from married men😉). The biggest threat that I have seen around is to the independence of choosing a career.  You simply can’t follow your passion  and learn the tricks of bartending, DJ-ying or be a writer.  Because they are not seen as viable career options yielding a regular/ sizeable income (read salary) which is very important to take care of a family that soon follows marriage.  An age-old notion that a man is the bread earner of the family is the root cause.

What’s really saddening?  When decision to stay together in a marriage is influenced by this question “what would everyone say” one should catch the hint “it’s not worth continuing”.  Sadly people are turning a blind eye towards it.  We are in a deplorable situation where crime in a marriage is acceptable than parting away and leading independent lives just because society is watching you and partly because a huge amount was spent on marriage ceremony (it’s sadly true).

For a marriage to be a bond it should be a decision of two individuals in love and mutual respect.  Anything other than that is a “Bondage“.

You can always beg to differ, waiting for your views.